Returned to see how things are travelling.

We were offered to a student as a case study with all the necessary data and records she needs ready to write it so I may get further calls about some additional interviews. Our story must be told apparently!

I had been trying desperately to dig up some peer support for the little super hero as her little club with exclusive membership is populated almost exclusively by adults except for herself. It seems my attempts had gotten back to her psychiatrist and he made it very very very clear to me, that my little super hero is the only child in the country with a confirmed diagnosis of Pediatric Bipolar Disorder, she sits alone on our little island. I dont believe that for a second we have a population of 20 something million! Even occurring at a rate 0.1% there HAS to be others.

He recommended a book called

Touched with Fire: Manic-Depressive Illness and the Artistic Temperament(Paperback)

I have ordered it so just to wait til it arrives he highly recommends her books and works she is a psychiatrist who has Bipolar Disorder. I always knew the best of them were nuts 😉

Jac had spent the Friday/Saturday prior in hospital being investigated for suspected appendicitis but she got the all clear.

They suspect it may have been a particularly painful ovulation. What interests me more is the fact that she is noticing pain again, she hasn’t for most of the year. Now her legs hurt, she is getting tired, feeling the cold and isolating herself from other kids at school so enthusiastically that she is concerned that she is becoming a bully. I wonder if her mood is dropping further her teachers and I are keeping an eye out.

Her psychiatrist did seem a bit concerned when I said that my stance on antidepressants is quite literally the last resort on my list, when he had asked how her sisters were travelling and how we had tackled the premenstrual dysphoria. I fear he assumed that approach was purely due to my reading rather than almost not surviving Mirtazapine and almost losing Bruce to Lovan and Akathesia. Its not an absolutely no way….its a, short term crisis treatment only under very close supervision after all alternatives have been exhausted, position. My reluctance to go anywhere near that group of drugs is from already barely surviving what it does.

He didn’t increase her dose this time but he did make it clear that such a low dose wont manage forever, as she grows her dose will need to increase, so we will have to monitor her mood closely.

She insisted on a new canvas and has been working on a peice for CAMHS.

Burying herself in gardening, painting and her art. Including filling her room with the art of others, digging through my signed prints to decorate her room.

Who knows perhaps there will be even more for her to choose from soon enough. Sandy is launching yet another kickstarter soon, I’m getting ready, the money already aside in an account. Launches on the 25th, Glorantha The Gods War let’s hope some prints are included in the offering I may be short of wall space to hang them but I am accumulating quite a collection and I like them, tbh I wouldnt have purchased them otherwise, they have all been kickstarter bonus’.

Their most recent dental trip was far less eventful than their last screening. I was prepared, a solid dose the night before and booking her visit separate to her sisters! It worked like clock work.

They did have a ball for her birthday at Comic Con. 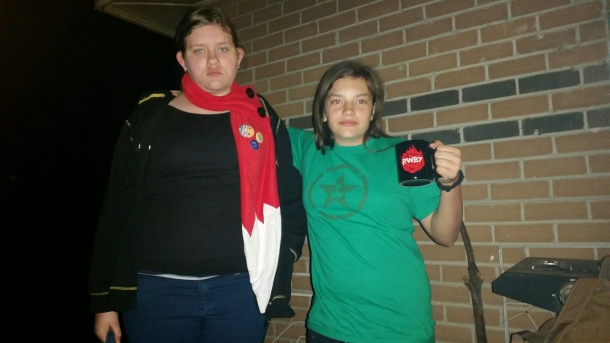 Spending loads of money and using Bruce to babysit all their bags lol. Although it almost didn’t happen the Thursday before Bruce had had to be rushed to hospital. He suddenly started vomiting blood, almost lost him. It seems he had developed diabetes. By Saturday morning he had stabilised and we were all there at the hospital at sparrows fart in the morning prepared to facilitate his escape from ward if necessary!