I am astounded regularly by the quality of the articles produced by Cracked. They may not get everything right but when they do they really hit home. For a satire magazine they don’t hold back they get right into those taboo topics and really twist the blade, letting the blood spill where it may. Their recent article about Jessica Jones does exactly that. 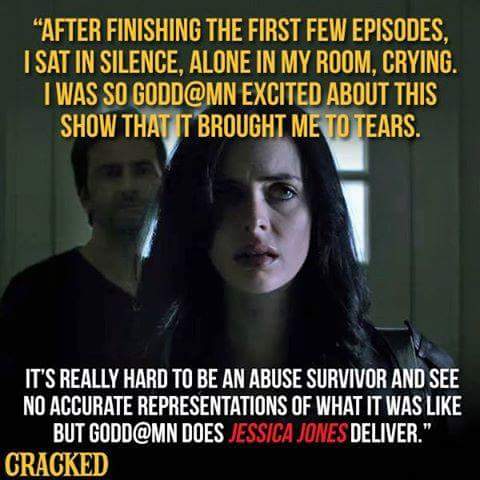 Domestic Violence isn’t about the Rape, the threats, the cars lurching towards you or the knife at your throat.

It is about being framed the bad guy each and every time you say, “No” until you say, “Yes”. It is the constant taking away of your right to be hurt, upset, fearful, feel disregarded in every action and decision day in and day out for years on end. It is not a sudden strike from out of no where, it is an insidious stealing of self determination.

It is a reframing of your entire world on a daily basis that when you finally get out they could tell you, “the sky is blue” and you would still have to go outside to check.
One thing I have learned is everybody has a little bastard in them. From church pastors, to the neighbour next door. Everyone at some point tries to manipulate a situation for their own selfish ends to your detriment, even therapists and doctors just to make their day easier and take a short cut,  every single time they do it will raise alarm bells from the time you escape.

Those bells will clang a warning throughout the ranges.

This can be a good thing, it can be a bad thing too, like the boy who cries wolf, survivors are struggling to provide their clanging bells a volume control, because their radar works, no two ways about it, it works day in, day out. They know when they are being made the scapegoat. The problem is most infringements are small and low risk, and thats how it starts small and low risk, small and low risk, until you turn around 3 years later and you discover that you are not allowed to say ‘No’ it has suddenly become the most grave of sins.

It is the give an inch they take a mile mentality. Eventually you stop giving inches entirely because there simply is no way to distinguish predatory abusers from Joe Blow who desperately needs a favour.

Because the challenge isnt merely saying it but having that answer respected and allowed to be the answer. “No” is not negotiable, it is not an opening position put on the table for discussion and debate, there is no end run around it.

So many people who hear “No” do not acknowledge it as the absolute that it is. They try another approach, they ask a different way, they try to test the waters.

Abusers are far more common and ‘weetbix’ than people realise and far more of them are women that the current social climate is willing to accept. Abuse and manipulation does not actually require physical strength. There are dozens of ways disparity can form within a relationship either by income, age, disability, control of assets, or knowledge.

Everyone is vulnerable from the powerlifter to the person of small stature, as much due to public assumption as to their position in a relationship.

And it never really ends.

I left the Territory in 2007 in fear for my life on police advice.

2016 I obtained sole parental responsibility and all visitation was formally removed, I no longer have to provide him my phone number or address within 7 days of any changes.

I also again have a fresh Final IVO for another year of apparent peace.

But these are just peices of paper, he and his family have ignored at every junction.

At any time he can call or turn up with my only recourse being to call the police and hope they can find him to actually action the orders I have obtained.

On paper it is over, it is done, we should have peace.

I did really well I have been handling two court cases across 2 courts with flying colours, I have attended every hearing and I obtained what I needed.

But towards the end the last 3 months the appearances, statements, affidavits have all not so much brought on my PTSD as that has existed for all these years and it was and still is very well managed. But its chafed it. It has rubbed against it like thighs on a hot sweaty day all red, inflamed and pain with every step.

I am without doubt at this point pretty essentially useless. Every form that comes to me, every process, I have to ask the relevant office for advice and help to fill out in the most basic sense, I can barely distinguish the necessary from the not.

I have quite essentially had to stop pursuing my own specialists and potential surgeries. Right now the additional paperwork and appointments is simply not within my capacity. I am focusing on the must do’s, meetings at school for my eldest, reviews and assessments for my youngest. Hunting down steel capped boots and books for their sister. I am keeping things afloat but that is all I am doing.

Simple refunds on items from ebay which have not arrived are harder to deal with than they are worth. I have essentially dropped a complaint against Bendigo Bank for breech of privacy for no other reason than I just can’t deal with the phone calls and emails anymore.

Things which at full strength I can sweep up and smash with my logic and reasoning are being let fall to the wayside.

Because I can’t, weeks after the court appearances are over and I am completing passport applications and chasing up amendments, the anxiety is still coming over me in waves, the flash backs,  the chest tightening and panic, the sensation of being overwhelmed and swamped.

I could try to, as I would normally do, navigate every obstacle ahead of me, the process of doing so right now with the waves of panic as we wait to see if it is really over is not productive, the wrong timing on a phone call or email and all the work would be undone. I am focusing right now on staying calm and keeping my cool, to ensure every response to every interaction is measured calm and appropriate.  This I have acheived and will continue to acheive until the storm of my flight or fight response has once again subsided.

The truth is someone could rob me right now and I largely wouldnt give a shit…..actually someone did rob me Friday night stealing my cosy spot 3 of my chairs and my chimnea and they left me with the most uncomfortable one……and the truth is besides my hip screaming in pain because this one isn’t moulded to my butt I dont give a shit…..just return my comfy chair you bastards and I won’t lay charges.