When I was younger my mum always answered the phone with “Nut House all the nuts are in!”

Those of us who live with mental illness predominantly in our lives on a daily basis tend to develop quite a dark sense of humour.  you would be surprised as to what is the most hilarious thing in the world on the days your family members were barely not successful in killing themselves.

But the stereotypes associated with Madness, Crazy, Psycho, Loopy and all the rest, rarely come close to the reality of what it is like to live in a home with mental illness.

The reality of Mental Illness is regardless of who and how many are diagnosed it impacts every facet of the function of a household as a whole. Communication is a significant challenge, Budgeting even more so. Planning outings and event’s is of a scale requiring the skills of a Seasoned War Veteren able to make sense of the Chaos of a warzone with the only light available being that of current explosions and flares.

Life is unpredictable
There is no standard day, no two are enough the same to establish a normal
Rather you aim for Routine if your routine is happening don’t sweat the rest shit will fly and meltdowns will run but the world will keep turning and everyone will be where they should be roughly when they should be.

The reason I have reached the Conclusion that we live in the Hundred Acre Wood was after seeing a picture from Winnie the Pooh, displaying how miscommunication happens….this is mental illness this is the crossed wires and short circuits we deal with most often, the most chronic symptoms which lead to meltdowns frustration angst and feelings of hopelessness when everything just doesn’t quiet seem to meet where it should…… 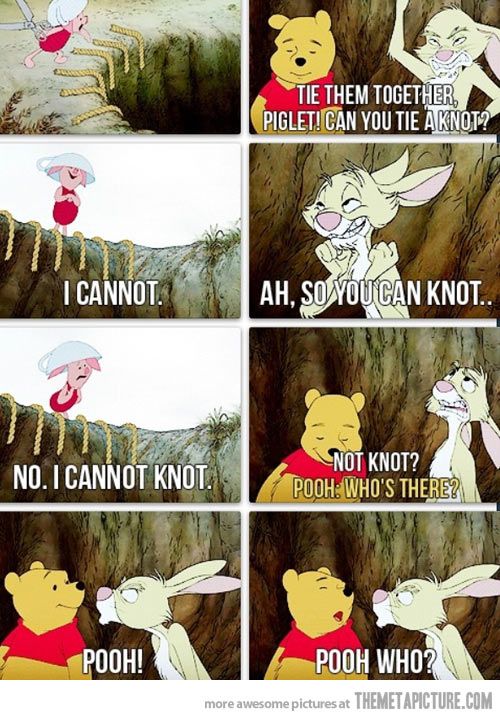 take a breath, try again, all is never lost until we stop trying.

4 thoughts on “We live in the Hundred Acre Wood!”